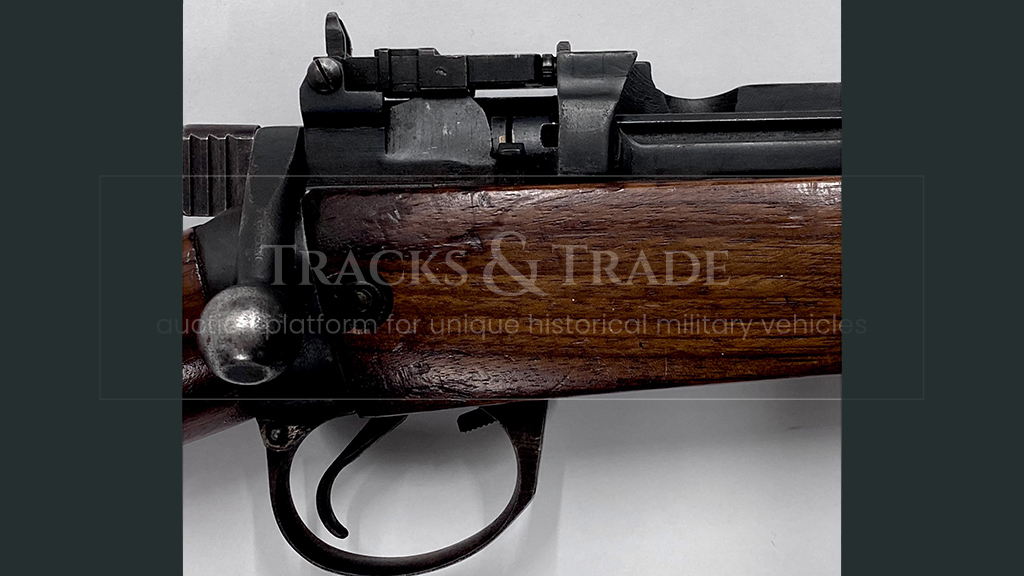 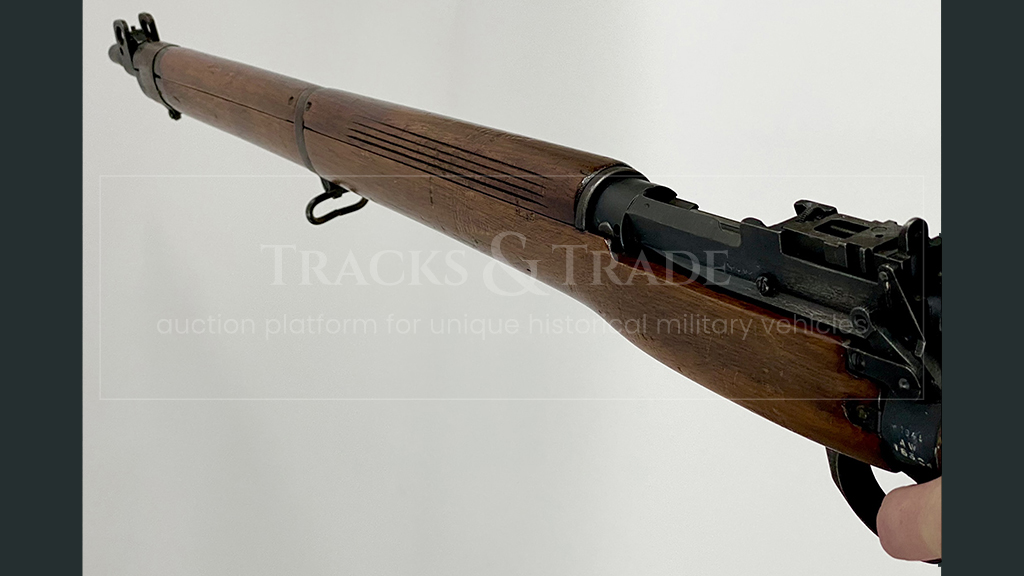 The No. 4 was developed from the Short Magazine Lee-Enfield in an order to produce a rifle that overcame the two main defects of the SMLE namely:

The resultant weapon was very similar in appearance but with an aperture fore sight; hinged at the rear of the body; the deletion of the nose cap; and the muzzle exposed for about three inches and fitted with lugs for a simple spike bayonet.

All screw threads were to national standards instead of being to the Enfield standard and the action was redesigned to facilitate mass production with unskilled labor.
The No. 4 Mk. was also fitted with a heavier barrel for improved accuracy.

This 1942 variant saw the No. 4, Mk. fitted with a tangent rear sight and prepared for a telescopic sight; the butt was fitted with a check rest

Like the Mk. 1 pattern, this 1941 variant saw a simplified method of removing the bolt. Most of these rifles were made in the United States or Canada and were marked US. Property or Long Branch.

A shortened version of the No. 4, designed for use in the jungle. The weapon was five inches shorter and had a prominent flash hider on the muzzle. The woodwork was shortened leaving a more exposed barrel, and a rubber shoulder pad was fitted to the butt. Although light to carry it was violent to shoot and was never notable for accuracy nor was it very popular

There were numerous postwar variants of the No. 4, the final ones being those rides reworked to take the 7.62 mm round used by the FN FAL of the 1950s.

This rifle has a very interesting history. On 22 September 1944 the British Suffolk Regiment has liberated the city of Weert.

On 3 September 1944, Radio Oranje (Radio Orange, the radio station of the Dutch government in exile in London), reported the liberation of Brussels. Everywhere in the Netherlands, people assumed that liberation was near at hand. Dolle Dinsdag (Mad Tuesday) underlined this optimism even more. Soon, however, a swift liberation proved to be an illusion for the best part of the Netherlands, but expectations in Weert were more realistic. The roar of cannons from Belgium could be heard every day. On Tuesday, 21 September 1944, the tension was extremely high. That morning, soldiers from the 1st Battalion of the British Suffolk Regiment had left Hamont in Belgium and were on their way to Weert. At the end of the afternoon, fights broke out west of the railway embankment towards Eindhoven. Not much later, the prayers in the air-raid shelter were drowned by explosions coming from nearby, from the direction of the Zuid-Willemsvaart. German troops had just blown up the Biester bridge, the city bridge, the railway bridge and the bridge at Lock XVI, and a red glow against the nocturnal sky told of a fire in the barracks behind the Van Horne barracks.

During the night, all remained quiet, both the British and the German troops were waiting for a possible attack. Weert had become a no-man's-land, until the German soldiers withdrew behind the Wassem-Nederweert canal.

At first daylight, the British troops resumed their advance. They did not meet with much opposition anymore. Soon, the entire city was liberated, followed by an exuberant celebration. Citizens dressed in orange and waved the Dutch national flag. The British were given a warm welcome and were greeted with cheers by the grateful local population.

After the fighting 4 Soldiers of the British Suffolk Regiment have been invited by the family Hermans to spend the night, enjoy a nice meal with the family and freshen up a bit.

The Family Hermans had a beautiful neo-classical building at the Oelenmarkt in Weert.
They had a wholesale trade in colonial goods, a coffee roasting and vinegar factory.
The short stay was prolonged several times much to the delight of the soldiers and the family.
When the soldiers finally left is unclear, but this must have been sometime later that year.

At the War's end, the Suffolk Regiment was near Bremen, Germany.Later the sons were established here as general practitioners in Weert.To the great surprise of the family, they found this left behind Lee Enfield in the 1960s.At that time still live, the son of the house regularly held 'shooting exercises' with it in the attic. Because the ammo was missing, the shot turned out to be limited to a ‘dry click’.

Due to the good contacts between the Rigter and Hermans family (the families had met each other during a holiday at Lake Garda in Italy), the Lee Enfield eventually found its way to the Gelderland Achterhoek.

This weapon is now offered in this auction. A historically unique piece with a well-known WWII history. Not just any weapon, but one that was actually used by a soldier of the British Suffolk Regiment.

Before we are allowed to deliver a disabled firearm, you need to be over 18 years old. We need a copy of your ID card, passport, or driver's license. As soon as this document is received, we can send you the disabled weapon with the certificate at the Buyers expense.

No delivery or shipment of lots can be made without presentation of the above mentioned
documents.
The buyer remains responsible for his purchase as soon as it is awarded and will pay at least the related costs.