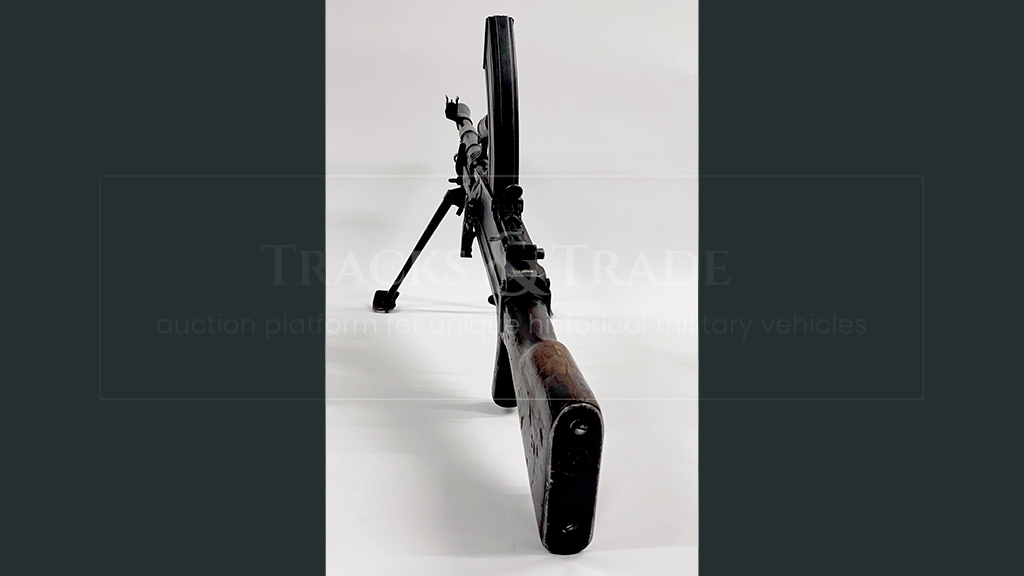 The principal weapon of an infantry section, providing the majority of its firepower so each British soldier's equipment normally included two magazines for his section's Bren gun.

Description:
The Bren Gun evolved from the Czechoslovak ZB vz26 light machine gun, but the development path was one that involved as much British as Czechoslovak expertise. During the 1920s the British Army looked far and wide for a new light machine gun to replace the generally unsatisfactory Lewis Gun. In 1930 there began a series of trials involving several designs, among them a slightly revised version of the vz26, the vz27. This emerged as a clear winner from these trials. However, it was made only in 7.92mm (.312in) caliber, and the British Army wanted to retain the .303 (7.7mm) cartridge with its outdated cordite propellant and its awkward rimmed case. Thus started a series of development models that involved the vz27, the later vz30 and eventually an interim model, the vz32.

Then came the vz33, and it was from this that the Royal Small Arms Factory at Enfield Lock evolved the prototype of what became the Bren Gun (Bren from the 'Br' of Brno, the place of origin, and the 'en' of Enfield Lock). Tooling up at Enfield Lock resulted in the completion in 1937 of the first production Bren Gun Mk. I, and thereafter the type remained in production at Enfield and elsewhere until well after 1945.

By 1940 well over 30,000 Bren guns had been produced and the type was firmly established in service. The weapons left at Dunkirk by the British Expeditionary Force even gave the Germans a useful stock of Bren Guns, and these were designated leichte MG 138(e).

The disastrous equipment losses of Dunkirk led to an urgent demand for new weapons of all types to reequip the British Army. As part of this process the design of the Bren was modified to speed production, and new lines were established. The original gas-operated mechanism of the ZB design was retained, as were the breech-locking system and general appearance, but out went the rather complicated drum sights and extras such as the underbutt handle in the Bren Gun Mk. II. The bipod became much simpler, but the curved box magazine of the 303 Bren was retained. In time more simplifications were made (the Bren Gun III had a shorter barrel, and the Bren Gun Mk. IV had a modified butt assembly), and there was even a reversion to the 1.92mm caliber when Bren guns were manufactured in Canada for China.

The Bren Gun was a superb light machine gun. It was robust, reliable, easy to handle and to maintain, and it was not too heavy for its role. It was also very accurate. In time a whole range of mountings and accessories was introduced, including some rather complex antiaircraft mountings that included the Motley and the Gallows mountings.
A 200-round drum was developed but little used, and various vehicle mountings were designed and introduced. The Bren Gun outlived all these accessories, for after 1945 the type remained in service and the wartime "extras" were phased out as being irrelevant to the increasingly hi-tech modern battlefield, and also costly to maintain. The Bren Gun on its basic bipod did linger on, however, in limited service with some armies as the Bren Gun L4 series. It was modified to fire the NATO standard 7.62mm (0.3in) cartridge through a barrel chrome-plated to reduce wear.

Variants:
Bren Gun Mk. I
The godfather of all later Bren models introduced in 1937 with drum sight, telescopic bipod, folding handle on the stock and the characteristic dove tail.

Bren Gun Mk. II
In 1940 various design modifications were made in order to simplify manufacture. The butt fittings were discarded, the drum sight replaced by a simpler tangent sight, the telescopic bipod replaced by a simpler fixed-length pat- term, the cocking handle no longer folded, and certain lightening grooves on the body were omit- ted, resulting in the weight going up to 23.25lb (10.6kg). This mark was introduced on June 6, 1941.

Bren Gun Mk. IV
This Bren was identical to the Mk. III except for a modified butt assembly

Before we are allowed to deliver a disabled firearm, you need to be over 18 years old. We need a copy of your ID card, passport, or driver's license. As soon if this document is received we are able to send you the disabled weapon with the certificate at Buyers expense.
No delivery or shipment of lots can be made without presentation of the above mentioned
documents.
The buyer remains responsible for his purchase as soon as it is awarded and will pay at least the related costs.